PATASKALA LODGE #404
In the year 1868, the United States was still recovering from the Civil War…
Historical Sketch of the Pataskala Masonic Lodge (written in 1968)
The beginning of the year 1868 found among the citizens of Pataskala a number of Master Masons, in good standing in their respective Lodges, but desirous of being organized into a local Lodge; that they might continue to improve themselves by being able to attend regular convocations, and give that opportunity to others who on application might be found worthy of becoming participants in the ancient rites and mysteries of Freemasonry.
This group obtain financing by personal donations and from civic minded Masons and friends, some of whom later dimitted or were initiated into the Lodge.  The original members, their trades and recorded donations are as follows: Miner Hildreth, Christian Elsass, $25.00; Ezra Whitehead, farmer, $25.00; William E. Atkinson, farmer, $20.00; Samuel Stone, $10.00; Medical Dr. Joseph Burnside; harness maker, leather and shoe cobbler, George W. Taylor; Presbyterian minister (in Pataskala for 35 years), Rev. Timothy Howe; Abraham J. Miller, farmer on the Creek Rd. S. W. (Rt. 151), $10.00; timber and sawmill man, Cyrus J. Peters; and a farmer, notary public and bookkeeper from Ireland, Edward D. Clarke.
Other contributors were as follows: Medical Dr. D. S. Mills of Jersey, $25.00; George Holmes, $20.00; Bro. Phil Tharp, $10.00; G. W. Beem, $10.00; Edward R. Clarke (son of Edward D. Clarke), $10.00; George Wickliffe, $5.00; L. Humphrey, $5.00; and John C. Jones, $5.00
It should be noted that these were not small donations in those days, neither was it a small task to organize and secure the financing for such a move considering the tremendous amount of manual labor involved in just making a living; and the slow transportation / communications of those times. Many an instruction or discussion was held on a moonlight buggy ride, where the only eavesdroppers were the horses and the roadside vegetation.
A petition signed by our organizational group “praying to be congregated into a regular Lodge,” secured from the Most Worshipful Grand Master, Howard, Mathews, a dispensation, given under his hand and seal at Cincinnati dated January 8, 1868 “authorizing our trusty and well-beloved brethren aforesaid, to form and open a Lodge after the manner of Free and Accepted Masons, to be called Pataskala Lodge.” Said dispensation to be in effect until the next meeting of the Grand Lodge. Under this dispensation, the first three named brethren were appointed in that order, to act as W.M., S.W., and J. W. This Lodge U.D. was first convened by P.M. William M. Cunningham, District Lecturer, on January 17, 1868.
That these busy worthy brethren were in earnest is evidenced by the fact that, while under dispensation, four new members were added to their number “by being initiated, passed and raised to the sublime degree of Master Mason.” These were Wm. R. Mills, Geo. D. Wickliff, Philip Tharp, and Marcus Root, making a total of 15 charter members.
In due time it pleased the Grand Lodge in session at Dayton, to issue a Charter to Pataskala Lodge No. 404 dated October 21, 1868, giving it permanent power to “initiate good men and true, who may apply to become acquainted with the sublime principles of the several degrees.”
The Lodge was formally instituted November 5, 1868, and officers were elected as follows: (Worshipful Master) Miner Hildreth; (Senior Warden) Ezra Whitehead; (Junior Warden) Cyrus J. Peters; (Senior Deacon) Abraham Miller; (Junior Deacon) Wm. R. Mills; (Secretary) Edward D. Clarke; (Treasurer) Joseph W. Burnside; and (Tyler) George D. Wickliffe. These officers were installed by Bro. S. Stacker Williams of Center Star Lodge No. 11, who was especially deputized Grand S.W. for that purpose. 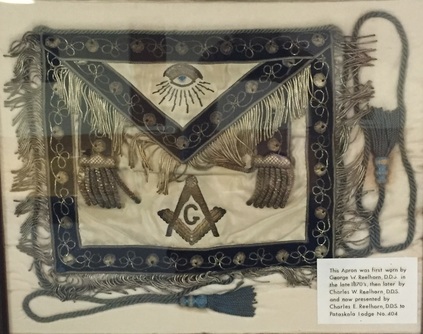 The caption reads: "This apron was first worn by George W. Reelhorn, D.D.S. in the late 1870's, then later by Charles W. Reelhorn, D.D.S. and now presented by Charles E. Reelhorn, D.D.S. to Pataskala Lodge #404"
The early history of the Lodge was marked by controversies concerning jurisdiction. Numerous joint conferences and frequent correspondence appear in the early records in attempts to establish boundary lines with neighboring Lodges. The most serious contentions were with the older Lodges established along the National Road, formerly Cumberland Road, now a mixture of U.S. Highway 40, State Highway 440 and roughly parallel to the (in process of construction) interstate Route I-70. By constant efforts and skillful diplomacy on the part of the arbiter appointed, all questions were amicably settled and later relations with these Lodges have been most cordial.
The first meeting place of the newly organized Lodge was in the frame building known as the Thayer Block, which stood on the corner where later Baird Brothers’ Business Block was built. Since that time the streets of Pataskala have been marked and this old Baird Brother’s Building still stands on the S.W. corner of Main and Depot Street.
When Jesse S. Green built the brick building north of the railroad, a room was especially planned for use as a Masonic Lodge. This is the building on the S.E. corner of Cedar St. and Vine St. which in 1910 was used as the Merrill Mead ice house. At this writing (circa 1968) it has been used for the past 25 years of so as a part of Mr. Edgar Hulls wrecking and salvage yard and at this writing is crumbling into a sad state. Beginning Nov. 7, 1871, this was the home of the Order until Jan. 20, 1891, except during intermittent periods when the room was not available, the Lodge was held in the old North Side School Building (now known as No. 80 N. High St.) or in the Burnside Building (S.W. corner of Main St. and Walnut St.) The former is converted to a residence and the latter was in 1904 J. L. Moore’s furniture store, and progressively Medical Dr. Robert Haubrich’s office, Brother Robert Mauger’s accounting service, and Brother Glenn Erskine’s insurance agency.
In January 1891, the room on the second floor of the Ab Joseph Building (north side of Depot St. near the corner of Jefferson St.) was secured on account of its more central location, and in this place (now long gone, replaced by a building housing Ned Bowie’s locker plant and store, now the Pataskala Banking Co.’s. parking lot) masonry held forth until the erection of the Post Office Building.
The Post Office Building (on the east side of Main St. midway between the B&O railroad and Depot St.) had the entire second floor, planned by Merrill Mead, as (then) “commodious” quarters to be used exclusively for Pataskala Lodge. The rental agreed upon was $75.00 per year and a 10-year lease was acquired. On moving into the new room January 13, 1903, a complete outfit of modern Lodge furniture and paraphernalia was purchased; which made Pataskala Lodge “one of the best equipped and most comfortably quartered country Lodges in the State.”
The building’s first floor was jointly occupied by the Post Office and the Pataskala Standard newspaper and printing office under the proprietorship of Wm. S. Needham, Sr. The post office was moved out in 1915, but the “Standard” Printing Co. has continued here under Bro. Harold M. Needham; and since 1955, under the direction of Mr. Tom Caw.
Most of the Lodge paraphernalia is gone (new robes, etc. in 1948) but most of the furniture is still being used in the present lodge hall.  In 1951, Pataskala Lodge took a big step in its history; they became property owners. Having outgrown their “commodious” rental quarters; under W. Bro. Arnold Lynd and spearheaded by W. Bro. D. Ludwig Linke (then J.W.); using the same techniques as our founding fathers, they “took up a collection” and realized a down payment on the Baird Brothers Business Block Building. On April 7, 1953, after an extensive renovation by the OES Chapter and the Lodge brethren, the first Lodge meeting was held in the new room.
These parallels should be noted; curiously enough in 1952 the Lodge borrowed approximately $3,500.00 to set themselves up on the same spot where they had, 83 years previously, borrowed $210.00 and organized the Lodge.
Items of expense in 1868 were: 1 pair Drawers $0.90, wood $0.75, spittoons $6.25 (Editor’s note: wonder what happened to these venerable objects?) District Lecturer $2.00, Canvas $5.00. Current items of expense as the Lodge approached its centennial in 1968 were: Candidate suit $19.95, supplies for maintenance of Lodge rooms $125.00, insurance on building and contents total $394.00, real estate taxes $310.98, refreshments (per year budget) $250.00, Canvas $50.00. 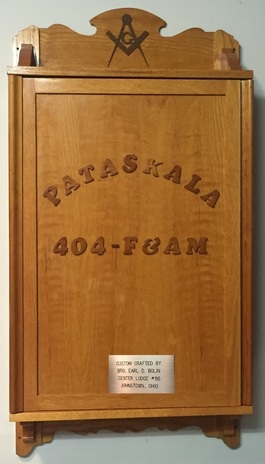 Members raised in 1868
(Under dispensation)        5
Members raised in 1904        9
Members raised in 1932        2
Member raised in 1967          7
Members raised in 2015        2
CREDITS
​          The majority of the historical excerpts contained herein were copied from the “Masonic History and Directory” produced for the 1968 Centennial of the Pataskala Lodge #404.  That publication was said to be “the third comprehensive history of Pataskala Lodge known to have been published; the first evidently written by Secretary Brother Richard Conine in 1904 and the second attributed to W. Brother Secretary Walter E. Norris in 1931-32.”
The information contained therein was assembled by and all credit should be given to a committee of our Brethren consisting of Ray Wallace, Jr., Samuel Lowery, R. Everett Wolcott, and Eugene Burkey, without whom, through their research and dedication to our beloved Lodge, many of these facts and figures may have been lost to history.
Additional historical information presented on this website has also been included from a publication entitled “Pataskala #404, 1868-2008, Brothers in the Making,” by specific members not provided; however, much of the data was attributed to the following source contributors:


Minor grammatical alterations have been implemented throughout the transcription of these texts, where modern language rules applied or where necessity required for ease of the reader’s use; however, the core text and meanings imparted remain unchanged as much as possible to preserve the wisdom and advice of those that have come before us.  We hope you receive them as they were intended and take from them what is useful.
Proudly powered by Weebly